Teenage star Ansu Fati has been given the huge responsibility of succeeding Lionel Messi in the No 10 shirt at Barcelona. 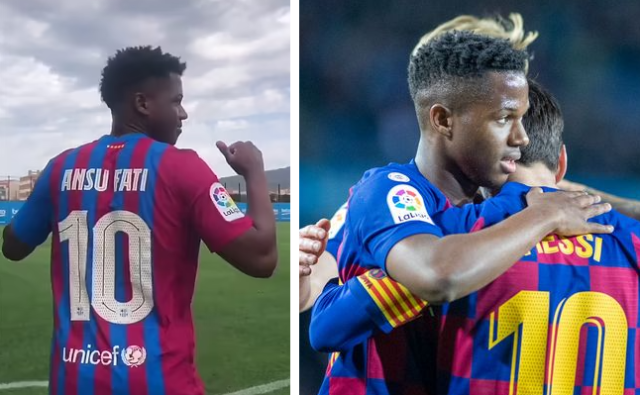 There had been some suggestions that teenage midfielder Pedri could be handed the iconic jersey number.

But in a video released on social media on Wednesday, Fati, who previously wore the No 22 shirt, was presented with his new shirt number for the 2021-22 season.

Messi’s shirt number has been vacant in the Barcelona squad since the six-time Ballon d’Or winner saw his contract expire.

He elected to join Paris Saint-Germain in France and Barcelona have now looked to maintain tradition by making his successor another graduate of the club’s famed La Masia academy.

In a statement on Barcelona’s website they detailed how ‘record breaker’ Fati is the perfect player to be tasked with filling the huge void left by Messi.

Ansu Fati has a new shirt number. After wearing the No 22 then No 17, the young Barca striker will proudly wear the number 10 shirt – a famous jersey previously worn by legends such as Leo Messi, Ronaldinho and Rivaldo,’ the statement read.

‘Despite being just 18 years of age and still recovering from injury, Ansu Fati forms part of Barca’s history as a record breaker and also with the Spanish national side.

‘Since his debut in August 2019, the youngster has set records in the league and Champions League.