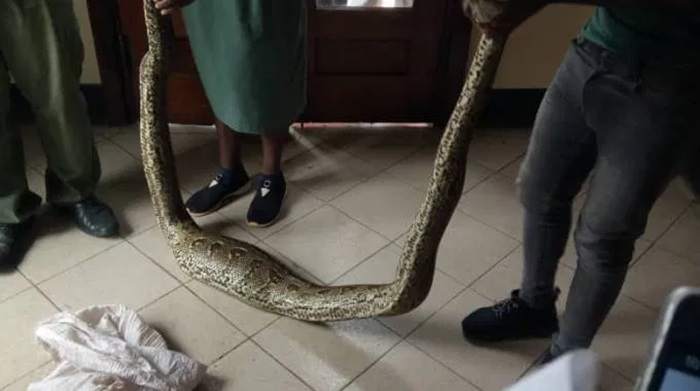 A sex worker, named Queen Mpofu has been found with a six-metre long python which she allegedly  kept at a certain lodge in Zimbabwe, and used for black magic.

It was brought to the Mutare Magistrates Courts as an exhibit. Several  people trooped into the courts to see the snake which was brought by detectives and officials from the Department of Parks and Wildlife for it to be recorded as an exhibit.

The snake was later taken back to the Mutare Museum for safe keeping, after it was registered as an exhibit,  since the Clerk of Court does not have a suitable place to keep it.

Queen Mpofu and the owner of the Green Gate lodge she operates from, Loice Samhere, were remanded in custody to December 20 for trial after Miss Notebular Muchineripi turned down their bail applications.

They are facing charges of contravening the Parks and Wildlife Act , after allegedly being in possession of  a specified animal.