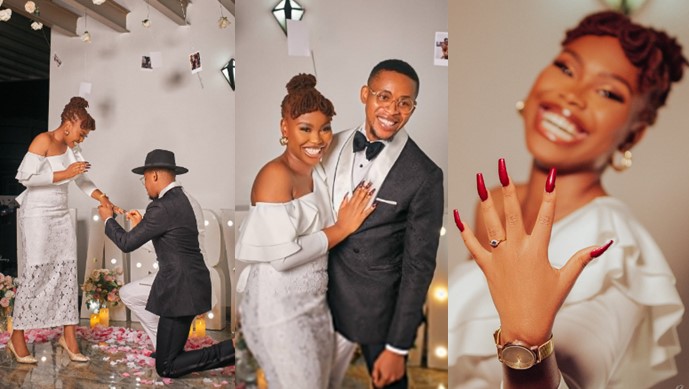 Nigerian writer and former feminism advocate, Solomon Buchi, has gotten engaged to his girlfriend after dating for one year.

The young man announced his engagement to his heartthrob, Arike, in a post on Twitter on Wednesday, 6th of July  2022.

Solomon, known on social media for his controversial views on topical issues, used to be addressed as the “King of feminism”, but he denounced his feminist position in 2020 because ”it does not corroborate the gospel of Jesus Christ that saved me”.

Fast-forward to 2022 and he has proposed to his woman. Solomon shared beautiful photos and penned some powerful words.

”Àríké said YES. We are engaged and we’ll be getting married!

On the 20th of June 2022 (our one year dating anniversary), I asked the most awesome woman to marry me.

After a year of dating — one that came with some reconstruction, intentionality and obedience to God.

I am proud to be your husband-to-be. I’m beyond enthralled with you in my life. I choose you, Àríké. In the multitude of others, na you. You’re my favour and I never knew how much I needed the beauty you brought until God gifted you to me.

I pledge to put you first & exemplify Godly headship. You’ll be the best version of yourself with me because I am submitted to God, and in Him, I will not lead you astray. I’ve been a purveyor of sagacious marriage values & I can’t wait to live the reality with you by God’s grace.

Now, I can show you to the world. Finally. I eagerly waited for this moment. I’ve been your fiancé for 16 days now, and man, I can’t wait to build a godly marriage with you.
–
Ife mi. Ayanfe mi. Iwo o shey litemi, mi ni yin e nu naye naye, moshe Ileri ko e fi ife mi a to e.

Ah, you’ve made an Igbo man learn Yoruba. Not just Yoruba but Ondo. My Ondo princess! My London baby.

SolomonBuchixArike. We have a wedding to plan,” he wrote.