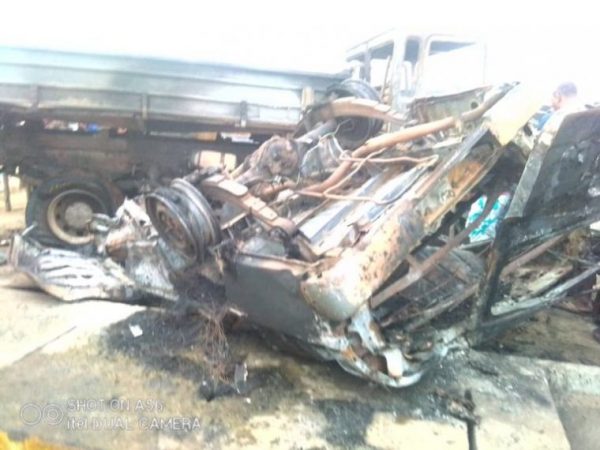 Four passengers are feared dead and some shops destroyed by fire when a tipper loaded with sand ran into a Mazda bus at Age-Mowo on Lagos-Badagry Expressway on Tuesday.

It was learnt that the commercial bus was picking a passenger at Age-Mowo Bus Stop when the accident occurred.

The truck driver was alleged to be on high speed, leaving his lane to crush the bus.

The News Agency of Nigeria also learnt that the accident resulted in an explosion that trapped some of the passengers inside the bus, causing them to burn.

The explosion also led to the burning of about seven shops near the scene of the accident.

Burnt bodies of four passengers were evacuated by officials of the Federal Road Safety Corps to the General Hospital in Badagry.

Godwin Okon, a passenger, who escaped unhurt from the bus, told NAN that the accident occurred at 4am on Tuesday.

Okon said: “Our bus took off around 3:30am from Badagry Roundabout with just five passengers.

“The driver was picking passengers at different bus stops to fill the seats.

“When we got to the Age-Mowo Bus Stop, the driver stopped for a passenger to get in.

“There was an argument between the conductor and the passenger over fare, and he dropped from the bus.

“Just like a movie, I saw the tipper speeding and crossing his lane, and all I know is that I managed to break the back window and escape.

“Immediately I escaped, I heard a loud noise, which resulted in fire.

“Then, I managed myself to where I am talking from now and I slept off for about 30 minutes.”

Okon, who had an injury in his leg, said that he lost his phone and some other items to the accident.

Ibrahim Alade, a resident of Age-Mowo, who witnessed the accident, said that six passengers escaped from the bus unhurt and left the scene.

Alake said: “The bus conductor managed to escape with one of his hands chopped off, while three passengers were also injured.

“They have been taken to a nearby hospital for treatment.

“The driver of the bus and three passengers were unlucky.

“They burnt beyond recognition.

“The driver of the tipper and his boys ran away.”

Olansile Sekoni, a Chairman of the National Union Road Transport Workers, said that he heard about the accident while getting ready for work.

Sekoni said that the accident was unfortunate, adding that the driver of the bus was waiting to pick passengers when the tripper ran over the bus.

The Badagry Unit Commander of the Federal Road Safety Corps, Sulaiman Taiwo, said that FRSC personnel had deposited the dead bodies at a general hospital mortuary in Badagry.

Taiwo said that the two vehicles were burnt and had been removed from the expressway.

He said that FRSC had been sensitising road users about the dangers of speeding.