Home ENTERTAINMENT He dragged my Agbada – Actor, Taiwo Hassan explains why he beat... 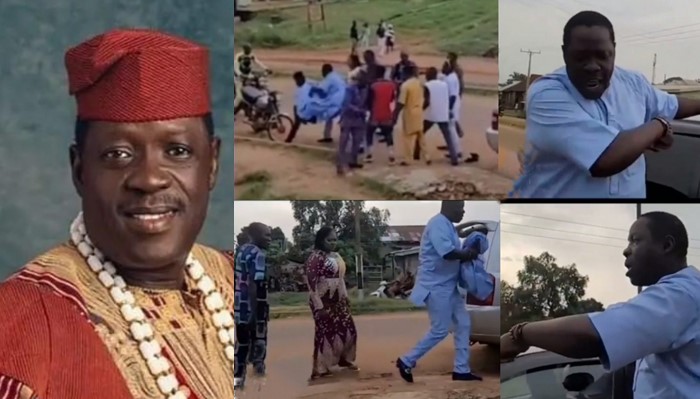 Nigerian actor, Taiwo Hassan also known as Ogogo has explained why he pounced on touts that accosted him in Ilaro.

He decided to share his side of his story when a video of him facing off with street thugs in his hometown of Ilaro during a project inspection, went viral.

Taiwo said they walked up to him for hail him and seek monetary reward which he eventually gave them.

However, trouble started when one of them dragged him by his clothe and demanded more, and it provoked him to react which led to an exchange of blows. The actor’s car also seemed to have been damaged during the bout with of the touts.

In a bid to control the narrative, Taiwo swiftly took to his Instagram page to shared the video and explain what transpired.

He wrote; “Before bloggers pick this up, let me tell my side of the story and truth. Was in Ilaro my hometown, for an inspection of a project, after which some unknown guys walked up to me for the normal appraisals.

We watch your movie

We watched you all through our childhood

All these as an actor we hear everyday, I offer all I had on me and one of them dragged me by my agbada and demanded for an amount I can’t pay. Asked him to leave me, he said “Do your worse” the rest is story. Please stop harassing actors or entertainers, do you pay anyone for doing your job, No it’s our job too. Accept all we offer when we do. Remember, once a boxer always a boxer”.