Nollywood actress, Toyin Abraham, has finally broken her silence and reacted to rumours that her marriage to actor Kolawole Ajeyemi is on the verge of collapse.

Reports had emerged on Thursday, June 30 that the couple were having a rough patch in their relationship after Instagram blogger, Gistlover, alleged that Kolawole had opened up to a friend about being unhappy in his marriage.

This claim by Gistlover stirred concern from fans of the celebrity couple, especially since it came after rapper JJC Skillz announced the end of his marriage to popular actress Funke Akindele.

Toyin’s management team, however, debunked the rumour in a statement released on their official social media page on Friday morning, July 1, but trust some fans to still want to hear from the horse’s mouth.

A concerned fan identified as @abolarintemita4 took to Twitter to ask the mother of one if all was well in her home.

“I heard that you are having issues in your family…..I was so sad because I really love you and i dnt want anything to happen to you…” The tweep wrote.

In response, Toyin Abraham insisted that there’s no issues in her marriage and forbade the public from spreading such rumors.

“Pls stop! I am not having any issues in my marriage.” Toyin Abraham replied.

The fan then apologized and clarified that she does not wish ill on the actors; she was only worried. 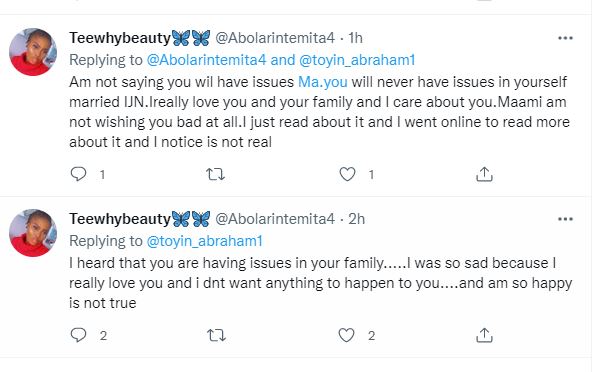