Home ENTERTAINMENT ‘I’m the one that gave birth to you’ – Toyin Abraham hurt...

Actress Toyin Abraham has got the internet buzzing with a video of her telling her son that she gave birth to him while running towards his dad in a game. 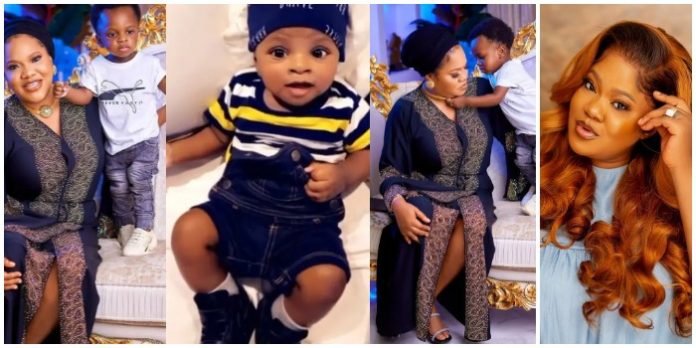 Toyin Abraham and her family joined the game of parents seeing whom their kids will run to if they go separate ways got the surprise of her life when her son ran towards his father twice in the game and she didn’t understand.

He runs towards his dad on the left when he went to the left and followed him to the right when he changed directions with his mother Toyin Abraham and that broke her heart completely as she didn’t expect that to happen.

Toyin Abraham sharing the video wrote ‘children will disgrace you’ with some crying emojis to show how she felt about what her son unintentionally did to her by choosing his dad over his mom which is barely seen.

Most kids are known to be fond of their mothers and all those who joined the game mostly run to their mothers but the son of Toyin Abraham seems to love his dad more hence run towards him twice in the game.