Nollywood actor, Jim Iyke has been called a SHORT MAN by a fan on social media. 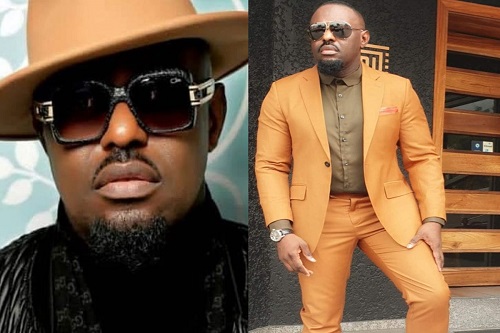 Jim who just participated in a movie was on a media tour and then shared some photos. The fan saw the photos and commented calling Jim SHORT.

Jim who saw the comment and didn’t like it then decided to drag the fan;s family in.

The fan @dbullofficial had said; ‘so Jim is short’, while reacting to the photos.

Jim then FIRED: ‘@dbullofficial your mother and sister might disagree if u know what I did to the slots’

Other fans then reacted saying:

@onewithchristangie; ”Everyone will laugh at it Jim went too far calling someone innocent mother a slat means jim mother isn’t a saint neither you don’t just call people mothers name like hello no if your mama raised you well you should know better you don’t throw stones when you living in a glass house and that’s on period”

@sabadanladi wrote; ”The reply was uncalled for, it was just a harmless comment, all these celebrities and overreacting, how can u insult someone’s mum?”