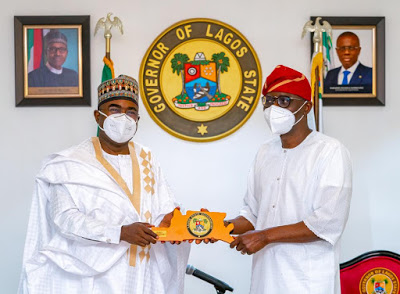 “Running for public offices is a big responsibility. You shouldn’t be in this important assignment for the public, and your head is filled up because of drugs,” he told Governor Babajide Sanwo-Olu of Lagos during a courtesy visit at the Lagos House, Marina, People Gazette reports.

He encouraged Mr. Sanwo-Olu that Lagos should take the lead in demonstrating to the country the importance of taking “integrity” drug tests.

Explaining the dire situation of substance abuse further, the NDLEA boss noted, “The drug scourge is now an epidemic in Nigeria. The prevalence is 15 percent, three times the global average. One in seven Nigerians takes drugs. We have found out that there is a nexus between drug use and crime.

“We felt that Lagos can show the way first with integrity drug test for students because it is our youths that are affected mostly; students, especially those in tertiary institutions, should do drug tests.”

However, he commended the governor for providing effective leadership in Lagos and managing COVID-19 in the state.