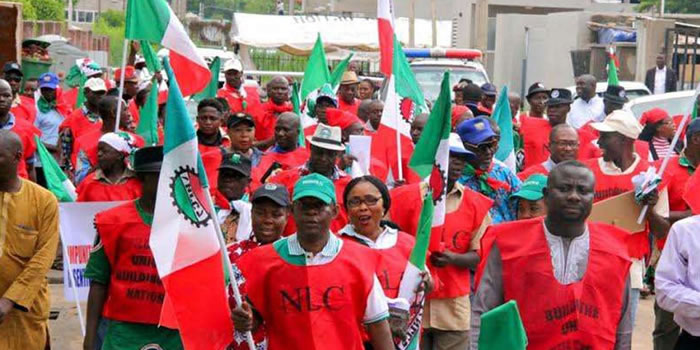 The Nigeria Labour Congress on Wednesday issued a December 31, 2019, ultimatum to the 36 state governments to conclude all negotiations and commencement of payment of the new national minimum wage.

The President of NLC, Ayuba Wabba, issued the ultimatum at the end of a one-day meeting of all interest groups on the Implementation of the new national minimum wage.

The meeting was held to give participants the opportunity to review the consequential adjustments in salaries based on the approved N30,000 national minimum wage.

Present at the meeting were the leadership of the NLC, all the state chairmen of the NLC and their counterparts in the Joint Negotiating Council (Trade Union Congress side) from the states, the Minister of Labour and Employment, Heads of Service of States and the International Labour Organisation (ILO).

A review on the level of compliance among states showed only five states have actually commenced the implementation of the new national minimum wage of N30,000 based on the consequential adjustment in salaries approved by the federal government.

The states are Kaduna, Kebbi, Lagos, Adamawa and Jigawa.

Although Jigawa state has concluded negotiations with the workers on their minimum wage, the NLC said it is yet to make its first payment to workers.

However, 13 states have constituted negotiating committees to engage Labour on the consequential adjustment in salaries following the new national minimum wage.

The NLC said states that have not put in place a negotiating committee with Labour on the issue are 19.

The NLC warned of dire consequences, including not guaranteeing industrial harmony in such states that fail to meet the December 31 deadline to resolve the issue.

The Union commended the federal government and the states that have already commenced the implementation and payment.

Also, the meeting applauded the federal government directive to all ministries, departments and agencies to ensure they paid their minimum wage arrears latest by December 31, 2019.

The meeting also resolved that organised labour in the states, comprising the NLC, TUC and the Joint National Public Service Negotiating Council would work jointly to ensure all workers enjoy the full benefit of the new National Minimum Wage.