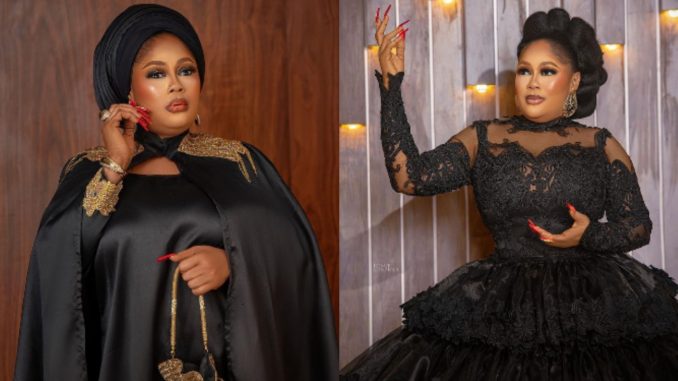 To celebrate her new age, Sindodo rocked a 18 carat hand made gold earrings with a royal black dress.

The actress looked all her shades of royalty in her birthday outfit.

The actress had an early birthday party organized by her nearest and dearest.

Recalls that the actress couldn’t hold back her tears as her friends and colleagues threw her a surprise birthday bash.

The actress who turns a new age tomorrow Monday February 21 has been treated to an early birthday bash.

Her colleagues from the Yoruba industry all came together to plan an elaborate bash for her which caught her off guard.

The actress couldn’t contain her tears as she wept at their sweet gesture.

In the sweet video, Sindodo stepped into the birthday hall and couldn’t fathom what was happening.
She attempted to leave the hall when her friends drew her back.

The mum of one wept profusely as the sweet love overwhelmed her.

Many of her colleagues cake together to surprise her and among them were Fausat Balogun, Kemi Korede, Ayobami Ojo, Ijebu, Regina Chukwu, Seyi Edun, Adeniyi Johnson, Jiganbabaoja, and many others graces the occasion.

Her birthday seemed like a reunion as many of her colleagues were present at the event.