The opinion of a Nigerian writer about rich and poor people having sex has caused mixed reactions among netizens on social networking platform, Twitter.

Praise George took to his page to share how he feels that poor people are “cursed with a strange sex drive which defies all reason”, saying they “pursue sex as if their prosperity depends on it”.

Praise says the rich however, hardly have time to have sex because they’re too busy making money and they spend their money on therapy to fix their low sex drive.

He wrote in full, 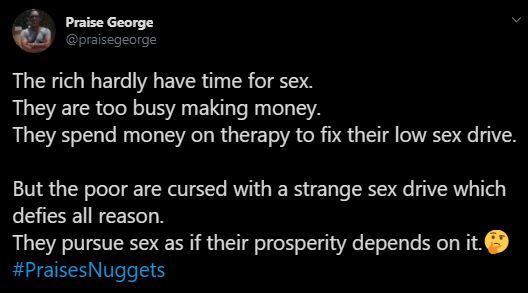 His stance was received with various reactions as some didn’t quite agree with him, saying he’s generalizing poor people and rich people.

Here’s what some of them had to say,

This is a mere assumption. The rich and sex are 5&6

That’s why the rich man’s wife sleeps with the poor gateman.

This shouldn’t be a general assumption sir.. most rich guys are directly proportional to sex life.. some will even go to the length of using the money to seduce house wives and have sex with them.. this happening well in local areas

He’s poor doesn’t mean he’s idle…. He’s even working harder to get Rich….. So don’t place it that way….. And I disagree with his statement. Do poor Man end up with different ladies in an hotel every day/week, of do they just go there to suck breast?

The rich hardly have time for sex.
They are too busy making money.
They spend money on therapy to fix their low sex drive.

But the poor are cursed with a strange sex drive which defies all reason.
They pursue sex as if their prosperity depends on it.