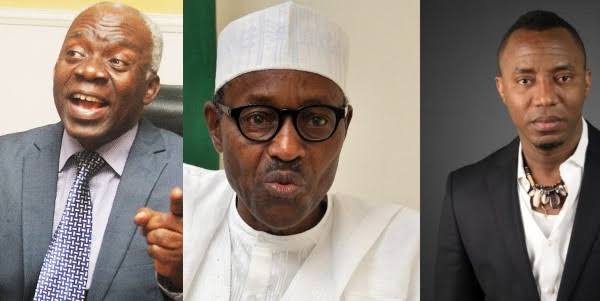 Popular human rights lawyer, Femi Falana, SAN, on Monday, revealed how President Muhammadu Buhari had in 2011, urged Nigerians to emulate the Egyptian revolution which led to the death of over 800 people.

Falana said this during an interview with TVC on its morning show “Your View: Let’s talk”.

According to the lawyer, Buhari had in 2003 staged a protest after he lost the presidential election under the defunct ANPP.

Falana who was reacting to the rearrest of Omoyele Sowore, convener of the revolutionnow movement by the Department of State Services, DSS on Friday.

Falana said, “General Muhammad Buhari and others had a protest in Kano in 2003, the police violently disrupted the rally, teargassed them.

“His deputy, late Dr. Chuba Williams Okadigbo passed on, on an account of the poisonous gas inhaled by him in a couple of days later.

“The ANPP leaders led by General Muhammadu Buhari contacted me and said please can you help us challenge this law that requires us to ask for police permission before we can express ourselves in our country.

“We went to the Federal High court, I didn’t charge them, today, that is the law, that Nigerians can protest, whether you call it the revolutionary protest, it is not a criminal offence.

“Unlike those who removed a democratically elected government in 1993, that coup was led by General Muhammadu Buhari.

“In 2011, following the revolution in Egypt, President Buhari urged Nigerians to emulate and be prepared to have a revolution like the Egyptian revolution, that revolution of Egypt killed over 800 lives, so who’s talking about destabilizing the country” he said.