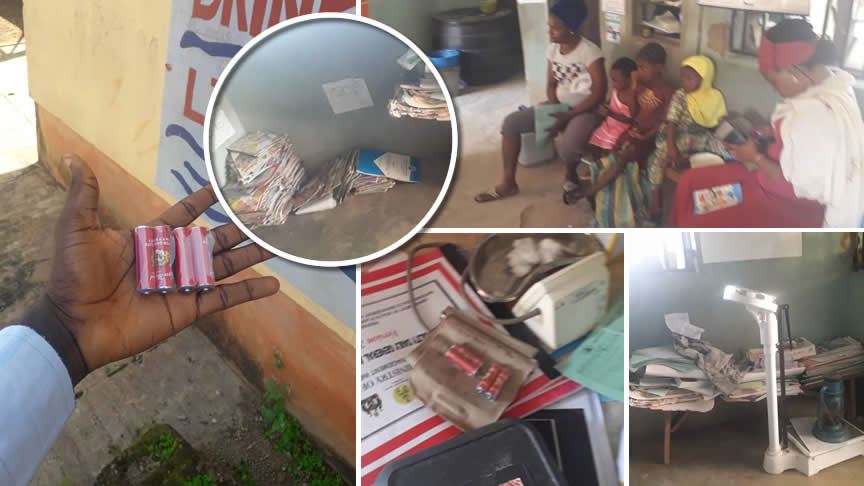 Facilities at the 13-year-old Osun primary health centre, Ilesa, are in a very disturbing state. Patients buy 2B exercise books for medical records and at times they buy tiger batteries before they can use sphygmomanometer also known as Blood Pressure metre and other appliances. But the Commissioner of Health in the state, Dr. Rafiu Isamotu says that the government can not rehabilitate the whole PHCs at a go and affirmed that there are challenges in the health sector and they are being addressed.

The State of Osun recently benefited the sum of N916m ($20m) from the Federal Government’s Basic Health Care Provision Fund which compelled the Executive Governor of the state, Gboyega Oyetola to declare state of emergency in the state and rehabilitation of nine(9) general hospitals and three hundred and thirty-two (332) primary health centres across the state on the 4th of May, 2019.

Six months after, WITHIN NIGERIA reporter visited the only primary health/maternity centre in Ward 7 under Ilesa-East Local Government as a patient to access the health care services and possibly evaluate the state of the health centre to see if there are new changes the centre had benefited from the ‘rehabilitation directive’ Governor Oyetola issued in relation with the $20m health fund.

It was an eyesore; patients buy 2B Exercise books for documentation of medical records in this 13-year-old primary health centre and at times they buy batteries to use some medical appliances especially during BP check up.

The five bedroom flat is situated in Ilesa-East Local Government, State of Osun and six localities are attached to the primary health centre and they are namely; Odundun, Anaye, Iroye, Iloro, Idifi and Idio.

The primary health centre was constructed by Hon. Isaac Olanrewaju Makinwa now late and commissioned by His Excellency, Prince Olagunsoye Oyinlola on 12th June 2006. The purpose of its establishment like others of its kind, is to provide quality health services especially in terms of maternity to residents at the grassroots it’s situated.

Facilities of this 13-year-old primary health centre are in a terrible state. There is no power supply in the centre and it is characterised with broken louvers, broken floors and outdated medical appliances. The outlook of the centre depicts a managebale one but a closer look at the centre would make one feel sad; if syringes, papers and other outdated medical appliances which distinguish a modern health facility to a traditional health structure are packed at one side, it would be an understatement to refer to it as “Iya Abiye house”.

Aside one motorised borehole project sponsored by UNICEF in front of the health centre where people pay a particular fee to fetch water and new coat of paints on the walls of the centre, there is little or no facility worthy of note in the 13-year-old primary health centre. The terrible state of roads linking the centre to nearby communities is alarming.

“It is easier to win a guniness ultimate search than to search for your 2B exercise book as a patient. Apart from broken pipes stored at the back of the centre, availability of two benches and two plastic chairs at the “supposed reception”, offensive odor that comes from the toilets that have apparently suffered neglect is alarming.

The health centre is characterised with broken floors, very similar with potholes on Nigerian roads. There are three beds available in the centre purposely for patients in a community where there are thousands of women and children.

There are only two benches available at the waiting room and a wooden chair at the entrance of the centre apart from two plastic chairs meant for workers and a large desk filled with medical card, files and 2B exercise books.

Asides two students of college of health technology who are temporarily working there for practical purpose, there are three health personnels who work in the centre but WITHIN NIGERIA reporter met only a visibly tired female worker who was attending to tens of patients at the same time.

WITHIN NIGERIA reporter arrived at the centre when a nursing mother was busy looking for the 2B exercise book she had earlier bought for his ward but could not be found. As a patient, the very first thing to do is to buy a 2B exercise book which is sold at the rate of N50 by a woman at the back of the health/maternity centre. Yet nursing mothers, pregnant women and sick people are forced to recieve treatment under this despicable situation.