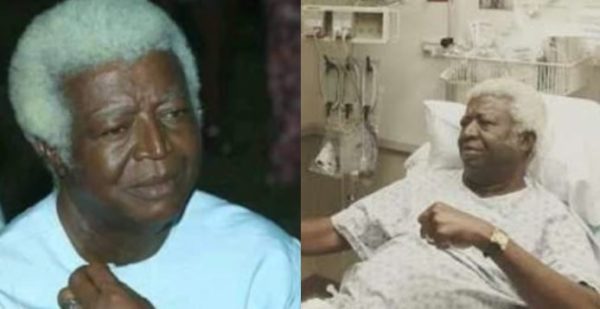 The movie star died in the early hours of Saturday after a prolonged battle with diabetes.

Monalisa Chinda-Coker, Director of Communications Actors Guild of Nigeria, confirmed the news in a statement sent to PREMIUM TIMES .

“On behalf of the entire members of the Actors Guild of Nigeria, the National President, Ejezie Emeka Rollas commiserate with the immediate family members, friends and fans.
He prays that God comfort them at this moment of grief.
May the souls of all faithful departed Rest In Peace,” the statement read.

The veteran actor went public about his ailment during an interview with Brekete Family a radio station in Abuja in 2015.

According to the talented actor, he never knew he had diabetes until a violent armed robbery attack that landed him in hospital.

He was quoted as having said, “said “I’ve gone to so many places; within the country, outside the country for treatment, until finally…finally, the thing [diabetes] claimed one of my sights (eyes). As I look at you now, I’m using only one sight (eye). They call that glaucoma.

“And gradually, it’s affecting the other one. I discovered that this thing [the illness] is a lifetime something. And it has robbed me of the job [acting]. And now, if I get a script, it will be hard for me to read it very well. And if I read it, if I strain my eyes for so long, it would look as if someone would lead me around the house or anywhere I want to go because it will affect the only one [eye]. So that’s my problem.”