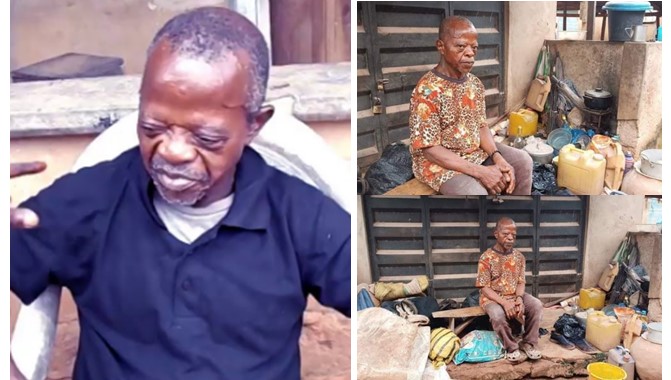 The Nollywood veteran was spotted living in an open space outside a container shop and Nigerians expressed dismay.

Photos which surfaced on the internet showed Aguba sitting with what was left of his belongings in the make shift open air accommodation where is is said to have been living for sometime.

A social media user named Benjamin wrote: “He has been homeless since.

Nollywood is a mess. I know this man since my childhood, he repairs umbrella for people. When they have a movie shoot , they will come and pick him in the market and use him.

After every shooting, they pay him highest N2000. He use to entertain us whenever he comes to our shop, he is so funny and he tells joke.

“He use to tell us all his behind the scene experience and he said sometimes, they use to give him only food after acting.”